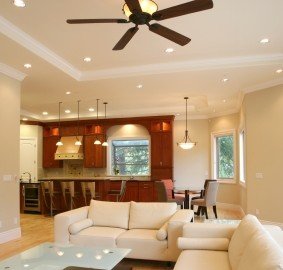 Ceiling fans do not last forever, and as times change so do the styles. Whether you like it or not, most ceiling fans become the focal point in the room in which they are installed. They are large, hard to miss and typically installed on a white or off-white ceiling. That being said, it is vital that your ceiling fan match the style of the rest of your home to avoid committing one of the worst interior design crimes possible; mixing non-mixable styles.

Want your ceiling fan to disappear?

Ceiling fans come in a variety of styles, colors and sizes. If you do not want your ceiling fan to be such a major focal point in your room, choose a fixture that blends into the ceiling it is installed up against. If your ceiling is white, choose a simple white fan that will blend in.

Want your ceiling fan to stand out?

The choice is yours, but in Arizona homes are filled with ceiling fans. Rather than hiding them and trying to pretend that they are not there, it has become increasingly popular to treat your fans as you would any other accessory (such as a table lamp or side table) and choose something that compliments the rest of the room.

With our large selection of various styles, sizes and colors, no matter what type of room you have, a ceiling fan is always a viable and stylish option.